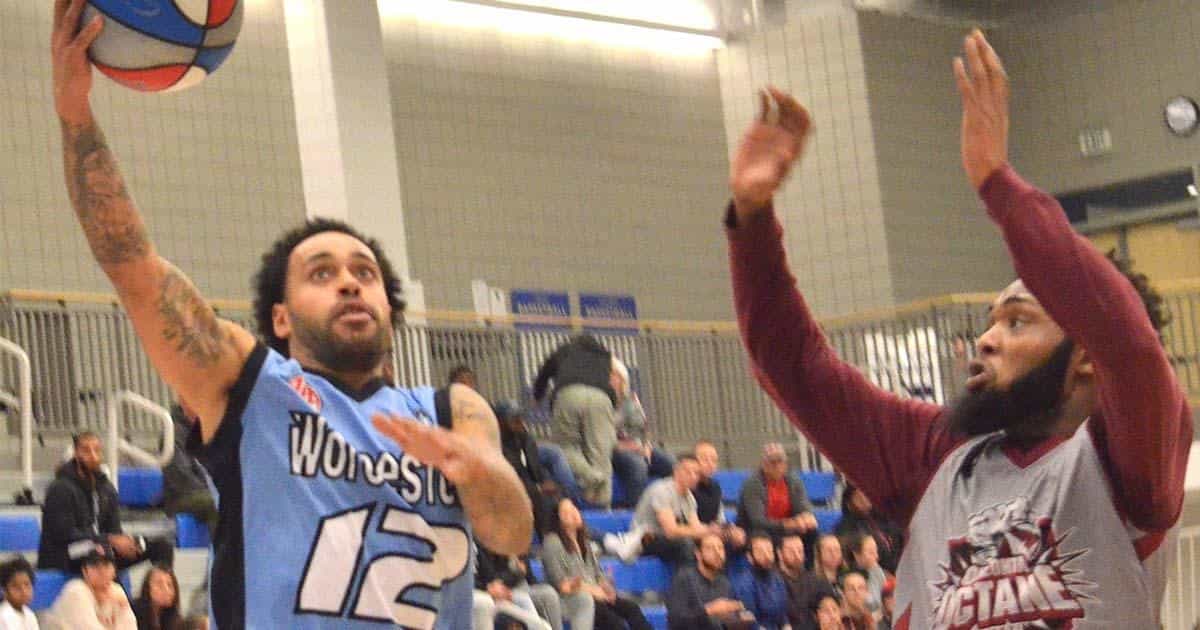 WORCESTER— This Saturday at Worcester State University, the Worcester 78’s (7-4) look to get back to work after having two games postponed last weekend due to weather.

“Saturday we’ll be coming off a long layoff so hopefully we can get our legs under us early,” said Worcester head coach Anthony Leonelli, earlier this week. “I like the way we’re playing out of the break —we’ve been very unselfish and a lot of guys are getting involved.”

One group of local athletes who will be performing on Saturday, will certainly have their legs under them, as they will be competing in a dunk contest and three-point shooting contest during halftime of the 78’s game, versus the Elite Kings from Queens, NY.

Local businessman Anthony Barbosa and his group of local high school athletes will be performing during the halftime show under his trademark American Pyramids.

“I really like what the (Worcester 78’s) are doing with bringing hoops and an ABA team to the city of Worcester,” Barbosa said. “As I do with American Pyramids, kids train with me and I’ve sent some kids to college, and I have a great class coming up.”

“I have some athletes in my program, that will be competing in both the three-point contest and slam dunk contest, “Barbosa said. “My ultimate goal is to help these kids get out of the inner city and give them an opportunity to go to school and get off the streets.”

Barbosa also heads up the successful, ‘Worcester Summer Jam Classic’ that is held every summer in Worcester at Grant Square Park. “We’re in our fourth year and have 6-8 teams come in [who are] either; Division 1 or professional or Division 3 or local players,” Barbosa said. “The best part is that the community comes together with 300-600 [attendees] receiving free food, free back to school gear, such as backpacks.”

While the halftime show will have the local Worcester 78s fan base excited, the Elite Kings bring to town their own unique asset in head coach Asia Blume.

Blume is one of the few female head coaches in the ABA, and she has a unique perspective in being both tough-minded and forthright in her decision making, that has earned the respect from her male players.

“When I get in the huddle, I speak with authority, I know what I am talking about and they listen to me,” Blume said.

Blume also brings a wealth of inner city experience to her Queens team; serving the past 14 years as a program director at the Boy’s and Girl’s Club in her home borough in New York. She however, has always coached boys or men, from the youth basketball stage up to an assistant coach for Richmond Hills High School (NY), and John Adams High School (NY), before earning her first head coaching opportunity with the Elite Kings in their first playoff game two years ago.

The team asked her to return and be the head coach the following year after making her debut, and at first was taken back by the opportunity.

“At first, I was shocked,” Blume said, “I don’t have a problem coaching guys, [but when I started], it was a little nerve-wracking,” Today, Blume has not only the respect of her male players, but of also from the coaches around the league.

“The Kings are always tough. They are one of the best coached teams in the league —they play extremely hard, and they’re one of the only teams that makes us make adjustments,” said Leonelli.

With Blume’s game experience in the ABA, she may be one of the few female head coaches to be able to earn a head coaching opportunity at the men’s collegiate level.

“I would love an opportunity, like that,” Blume said. Someday she may just make history in doing so.

You can catch all the action as this Worcester 78’s game presented by American Pyramids, begins at 7:00pm on their home court at the Wellness Center on the Worcester State campus.