CHARLTON - An “be on the lookout” alert broadcast notified local area police about a stolen vehicle report in Brookfield during the early morning hours of Saturday, April 17.

At around 5:15 AM, a Charlton Police officer spotted the vehicle headed westbound on Rt. 20 and attempted to engage in a traffic stop.

The driver exited the vehicle and fled on foot into the woods near Sampson Rd.

Officers from the Brookfield Police, Sturbridge Police and Troopers from the Massachusetts State Police assisted the Charlton department in establishing a perimeter.

A State Police canine tracked the suspect and police apprehended him as he headed for the Mass Pike Eastbound Plaza.

Police did not release the name of the suspect, as he is a juvenile. 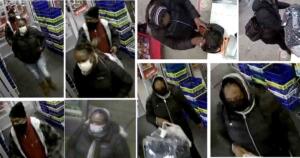 Police in Sutton are asking for help from the public to identify the two individuals in the provided pictures.
1 2 3 … 760 Next »

Worcester Police arrest a 53-year-old man after a victim dies from his injuries at the hospital after being stabbed in the back of a car.
1 2 3 … 760 Next »

A Dudley man faces federal charges for allegedly being involved in a scheme to obtain and misuse COVID-19 related unemployment assistance.
1 2 3 … 760 Next »