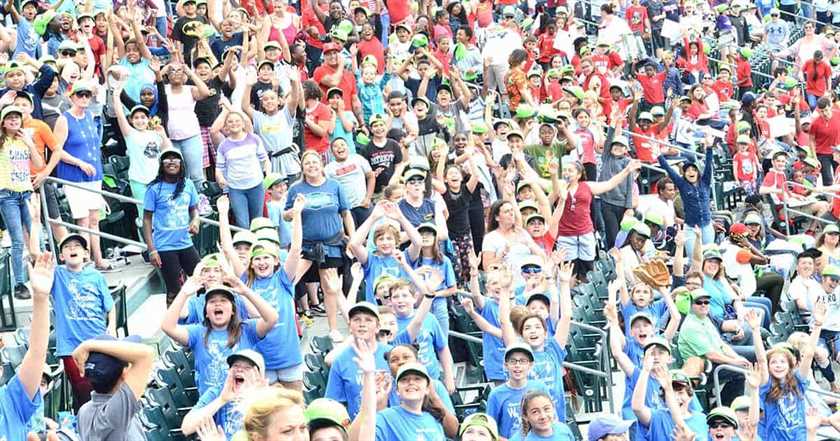 WORCESTER— Hanover Insurance Park at Fitton Field was packed with 5,147 school children and teachers from the City of Worcester, as the Worcester Bravehearts and Hanover Insurance hosted their second ‘Baseball in Education Day’ on the Holy Cross campus Thursday morning.

“It’s great for the kids, they get to come out from school and watch baseball and they brought a lot of energy to the (field),” said Braveheart starting pitcher and Worcester Academy graduate Jack Steele.

Steele, who just finished his first year at UMass-Amherst, went five innings, allowing only two hits to go with two runs, while striking out four.

“I felt I had a good outing, I left a fastball up and over the plate, but other than that, I was hitting my spots all day,” Steele said.

Sean Murphy (Westfield, Ma) took Steele’s first pitch in the fifth inning, that was up in the zone, and lofted it up and just over the fence in left, to put the Starflies up 2-0.

“I didn’t think about (the wind) with (it) blowing from right to left,” Steele said afterwards, “but when (Murphy) hit that one up into the wind, I thought that ball might travel and unfortunately it did.”

The Bravehearts were sound defensively all day, as Steele picked off two runners in the first inning; second baseman Mariano Ricciardi made a diving catch in the fifth, and catcher Craig Corliss (Worcester Academy) threw out a runner at second in the eighth inning.

Corliss, who just finished his freshman year at Siena College, and has worked with Steele through their years at Worcester Academy, was real impressed with Steele’s overall performance.

“I thought (Steele) gave us a good outing, we played together at Worcester Academy and we have good chemistry,” Corliss said, who was solid all day behind the plate for the Bravehearts.

“I’ve been working on my game with my dad and grandfather, getting more comfortable behind the plate, and having some good swings (on the ball),” said the former Hilltopper.

Following Christian Walsh’s (Sterling, Ma) three-run bomb to left field in the top of the eighth to put Westfield up 6-0, Corliss put the Bravehearts on the board with their only run.

The Hopkington, Mass. native smacked a double down the third base line, to plate Worcester’s Ben Rice (Cohasset, Ma), who led off with a walk.

Westfield’s pitching staff kept Worcester off the base paths early and often throughout the day, as the Bravehearts’ leadoff hitters reached only twice during the game, as Ricciardi led off the first inning with a single, before Rice drew a leadoff walk in the eighth.

Overall the Starflies (3-5) allowed only three hits on the day, while striking out 10 Worcester batters, for the 6-1 win.

“(Westfield) was throwing strikes early (in the count), catching the corners, and that got us out of rhythm,” said Case. “We wanted to run the bases, but when they are throwing strikes and getting guys out, it makes it a lot harder.”

Worcester will host the Brockton Rox this Saturday at Hanover Insurance Park on Fitton Field.

The Worcester Division of Public Health and the Department of Inspectional Services because of laboratory testing showing high levels of E. Coli.

Former accountant for the town of Uxbridge, Justin Cole, 38, of Harvard, is facing 16 counts for various crimes related to the theft of $729,000 over a five-year period. According to Attorney General Maura Healey, the funds were stolen from the towns of Uxbridge and...