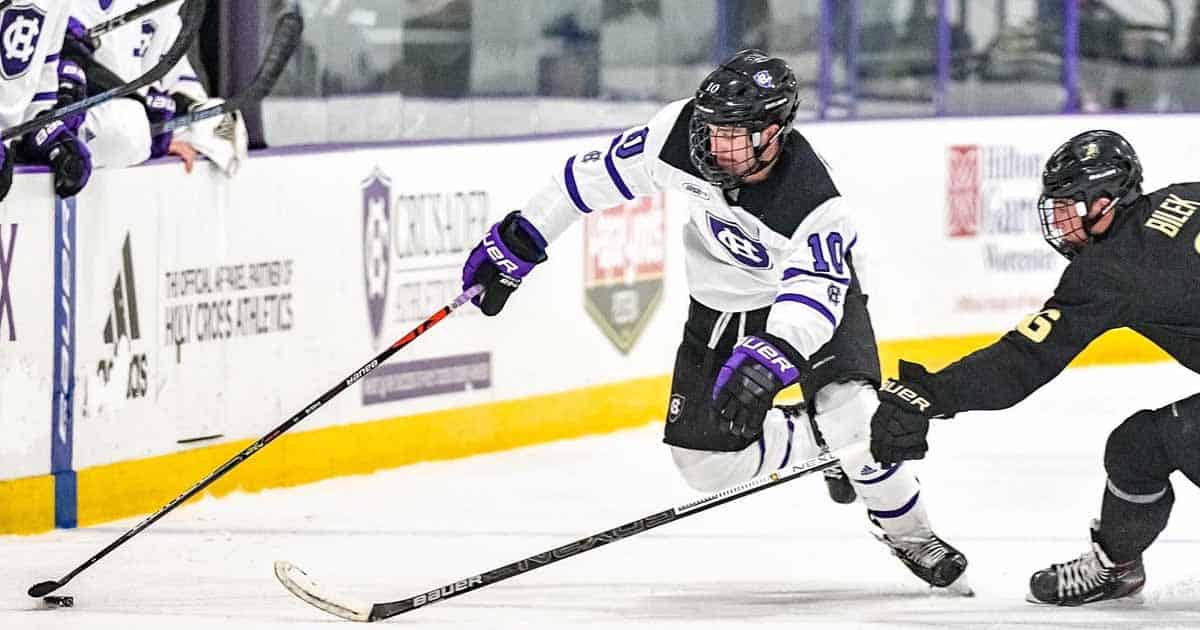 Holy Cross’ Worcester County Weekend starts on Friday when Holy Cross Men’s Hockey hosts Robert Morris University for the first of back to back games. Both Friday and Saturday’s games are at the Hart Center and start at 7:05 PM.

All Worcester County residents can receive $5 tickets by buying online at goholycross.com/worcester.

Friday will be the first meeting of these two teams this season.

Travelling from Pittsburg, Robert Morris brings a 9-15-4 record on the season. They come in on a six game winless streak (0-5-1).

The Crusaders enter the weekend 9-14-5 on the season, but have posted a 6-2-1 record since the start of 2020. They are coming off a difficult overtime loss to #11 Arizona State University at home last weekend.

The Crusaders tied the game 1-1 in the second when Logan Fergusson, a junior, scored his sixth goal of the season. Three minutes later senior Neil Robinson scored his eighth this season on the breakaway to take the lead. Another senior, Kevin Darrar, had assists on both goals.

An Arizona State goal early in the third sent the game to overtime and a shot through traffic from the point got by Crusaders freshman goalie Matt Rodomsky to allow Arizona State to escape Worcester with their 19th win of the season.

Rodomsky, Atlantic Hockey Goalie of the Month for January, had 25 saves. He now has a 2.76 goals against average on the season, down from 3.17 after the last game of 2019.

Rodomsky is one of seven freshman brought in by sixth year head coach Dave Berard this season.