Who’s Got the Best Italian Grinder In Worcester? This Guy’s On A Quest 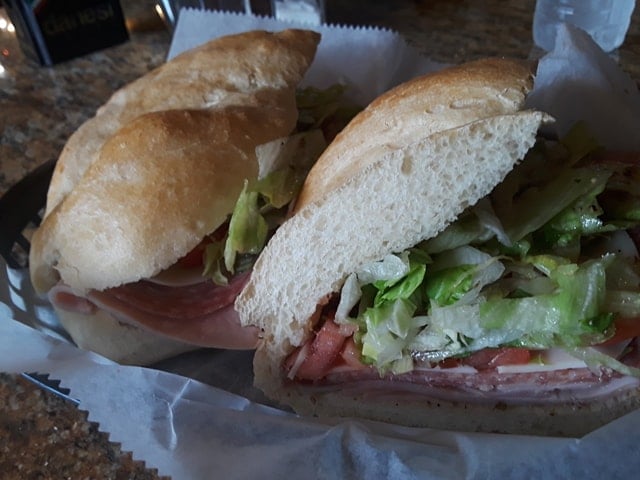 A little while back, someone posted a photo on the popular Worcester Facebook page You’re Probably From Worcester, MA, If…of a substantial Italian grinder. She pointed the cold-cut packed sandwich up to the gorgeous early-fall sky, declaring this sandwich from the Regatta Deli the best in the area.

“Fueled by REGATTA DELI!!” she wrote. “I know the debate has been had…but the best sandwich hands down is from the Regatta Deli! Especially when enjoyed over 4000 ft up! And George is the best!”

It, of course, set off a firestorm of debate.

Take the Poll Below

Hold the big bread just a minute! One cannot just declare such a thing and make it so. Worcesterites love sandwiches, and we love to argue. Just ask whether a hot dog is considered a “sandwich” or if pineapple on pizza is acceptable.

The “Italian grinder in the sky” post has hit 400 comments and it’s still toasting.

“One folded piece of ham and one folded piece of salami, plus some lettuce/tomato/onion and a massive annoying piece of soft bread is not an Italian grinder,” chimed in one. Others opined that the Regatta’s meat-to-bread ratio had indeed widened over the years, while others reacted, “Love Regatta… is the best place in Worcester…I been going there over 20 years….”

That definition lends itself to a whole lot of discrepancies. The traditional Italian’s surely got to have the right balance of meats, cheese, toppings and dressing, and the bread’s got to be appropriate. But this means different things to different people.

What, in fact, makes for the best Italian grinder, and where is that grinder to be best enjoyed in the city?

You might know Gabe Rollins. He grew up in these parts and is enmeshed in the music scene, majorly active on social media, entertainment director for stART on the Street/Station and even ran for public office a while back. He and his wife are always hitting new venues and restaurants. They’ve got a thing for breakfast spots, but Rollins not long ago embarked on a quest for the quintessential Italian grinder.

The seeds for the quest were planted way back. When he was a kid living on Edgewater Ave. in Shrewsbury, if they had time off from school, he and his friends would trek to the top of the street and get Italian sandwiches and a Coke from Orlando’s meat market. For a long time, this treat fell off his radar, but about five years ago, while working nights, he found that delis and sandwich shops would be open early in the morning and make him a sandwich when he got out of work. The Regatta and Bushel N Peck were both open, and Rollins said he was “floored” to realize what a stark difference the two had in making their Italians.

“I am obsessed with Worcester and the rejuvenation of Worcester as a city,” said Rollins. “I look for anything that we can take pride in, because we need stuff to be proud of. Italian sandwiches are a very Northeast city thing. I started to learn all about them in wondering why they could be so radically different from one place to the next.”

The nuances, he said, are many, from the type of bread, to the veggies used, cut and applied, to the combo of meat and thickness of the slice, to the type of cheese, which is nearly always provolone, but even then, the aging can differ.

“Most importantly, how it is dressed and seasoned,” said Rollins. “I wondered what the best Italian in the greater Worcester area was.”

Rollins said that the single biggest thing that makes an Italian sandwich a good one is the “eatability of the thing.” He recalls ordering from a local shop that is famous for its sandwiches, and the sandwich maker held it up and said, “Look at all that meat!”

“Who cares, though?” said Rollins. “You should be able to take a bite and your mouth should be filled with a symphony of flavor. There are so many flavors in an Italian sandwich and they should all work in concert with each other. The sandwich should exist in a way that every bite you take has all of those flavors. A big pet peeve for me is provolone that is too strong. It can overwhelm the sandwich to the point that all you taste is the provolone. You’ve got to balance that out. Texture on the bread is huge, too. Crusty on the outside, soft on the inside. Let that oil and vinegar get soaked up into it a little bit, too.”

There are personal preferences that go beyond the standards, though. Rollins doesn’t consider himself a mortadella guy, and it’s just “not an Italian” without capicola. He wants his meats and cheese sliced thin, and he forgoes the onions, always wants hots and likes the lettuce to be shredded iceberg. Oh, and never toast an Italian sandwich, he said.

“There is a time and a place for that,” said Rollins, “but I associate toasted sandwiches with pizza places and I have found that for the most part, mainly because of the bread, pizza places do not make a good Italian sandwich. Toasting bread is a cheat to turn average or bad bread into good bread. Really really good bread does not need to be toasted.”

With the goal to find the best Italian in Central Massachusetts, Rollins still orders them and continues the search. It seems fitting at some point that there will be a “Rollins” sandwich on a menu somewhere.

So, who has the best Italian grinder, according to Rollins? Here are his Top 5 picks.

Ciao Bella, 402 Grove St., Worcester, was also mentioned by another Italian grinder purist who seeks the best in the city as among the best. Rollins had not tried it yet, but plans to. Ziti’s, Napoli’s and Steve’s Pizza received many positive mentions on the thread, and many stand by their beloved Regatta, too.

“What is so great about Palma’s?” asked Rollins. “Let me count the ways. The first thing I think of actually has nothing to do with the sandwich. It’s the place. I mean how awesome is Palma’s? It just screams authentic. It’s floor-to-ceiling with food that feels right off the boat. So for the actual sandwich, it is everything I described above. The bread is baked in house and is delicious. Just the right combo of soft and crusty. Listen, if you are in an Italian bakery and they offer an Italian sandwich, GET IT. Meats, seasoning and dressing are all on point. It’s a masterpiece.”

Editor’s tip: An Italian grinder is a particularly good travel sandwich. It packs well and lasts a long time, making it ideal for the park, an event or the beach. Another editor’s tip: seagulls love Italian grinders and pluck them right from your hands if given the chance.