Railers Get Nailed by the Nailers After Pulling Even in 3rd 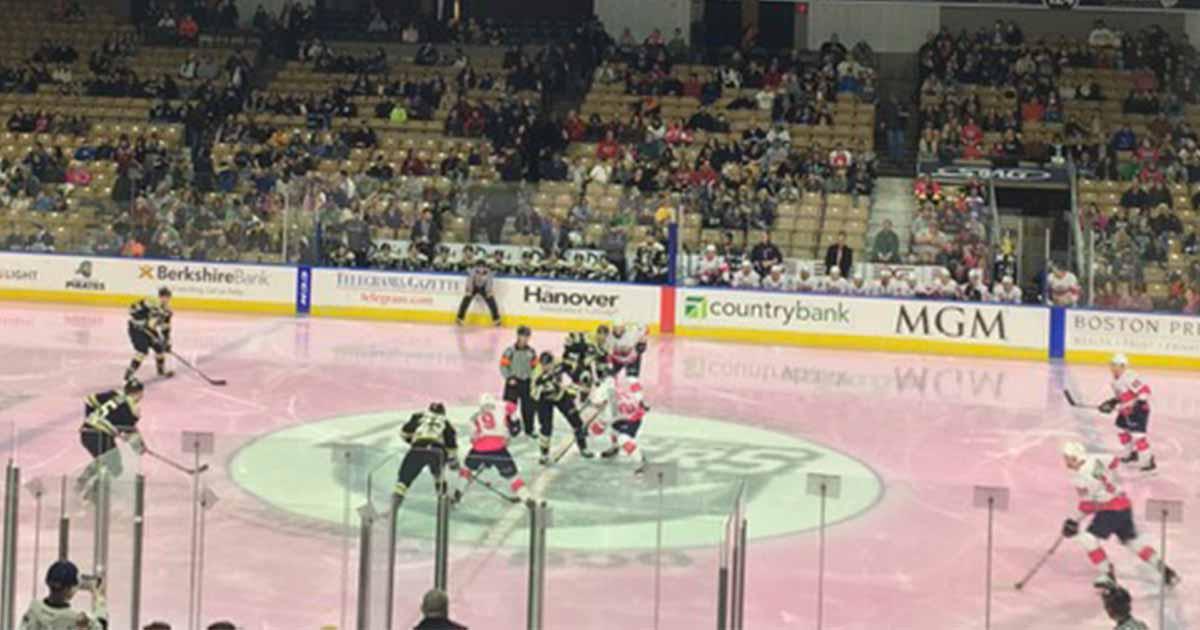 The Worcester Railers got defeated at home by the Wheeling Nailers by the score of 5-1 on Saturday night.

Despite losing by four goals, the Railers were in this game until about halfway through the final period.

The game was 1-0 after two periods when Tyler Barnes of Worcester scored a power play goal within the first two minutes of the  final frame to tie the game.

The Wheeling fans were noticeably displeased as shouts of, “That shouldn’t count!” were heard because it appeared that Barnes kicked the puck into the net. Upon review, though, the referees let the goal stand.

The jubilation for the Railers was short lived, though, as the Cedric Lacroix of Wheeling scored the go-ahead goal less than a minute later.

The Nailers never looked back after going ahead and scored an additional three goals to pad their lead to 5-1.

The frustrating part about the first goal by the Nailers was it was a short-handed goal. While trying to clear the puck, Wheeling’s Michael Phillips stole the puck, broke away, and scored an easy goal. Phillips had two goals and an assist on the night and was the first star of the game.

Power plays were some what of an issue for Worcester Saturday night. They were a mere 1/5 on power play attempts on the night and gave up that important short-handed goal on their first power play. The opportunities were there for the Railers; they just could not convert.

This game was physical from the get-go. There were a litany of big hits in the first five minutes of the game. Inevitably, a fight broke out between Worcester’s Yanick Turcotte and Wheeling’s Jake Schultz with about 14 minutes to go in the first.

The hits and fighting never subsided as there were at least three more near fights that occurred.

The last of the almost fights nearly broke out in the last five minutes of the game when Wheeling’s Cedric Lacroix rocked Worcester’s Dylan Willick in front of the Nailers’ net. Willick stayed down for several minutes before skating off. Lacroix was penalized a ten minute penalty for game misconduct.

Needless to say, the Worcester players were not pleased with the hit and tried to retaliate but the referees intervened.

The Railers played pretty well tonight as they were putting shot after shot on goal from the second period on. Unfortunately for them, Wheeling’s Jordan Ruby was a stone wall in net saving 33 out of 34 shots sent his way.

As a result, Ruby was the second star of the game.

The Railers were looking for the three points tonight via a win to position themselves into the playoff picture.

Going into the game, the Railers were 10th in the conference, but only two points back pf the eighth and final spot.

The Nailers were also 10th in their conference with 46 points, and the win should boost them into the playoff picture. Now with 49 points, they see themselves in a tie for seventh and eighth place in the West depending on outcomes of other games.

The Railers will look to rebound Sunday afternoon against the best team in the west, the Cincinnati Cyclones.

The Railers would love a nice home win Sunday as they will be on the road the remainder of the month. They return back to Worcester March 3rd when they face Adirondack.

Can the Railers rail off a stretch of wins to get back into the playoff picture? It will be tough, but it could still be done, and it will have to be done on the road the rest of this month.