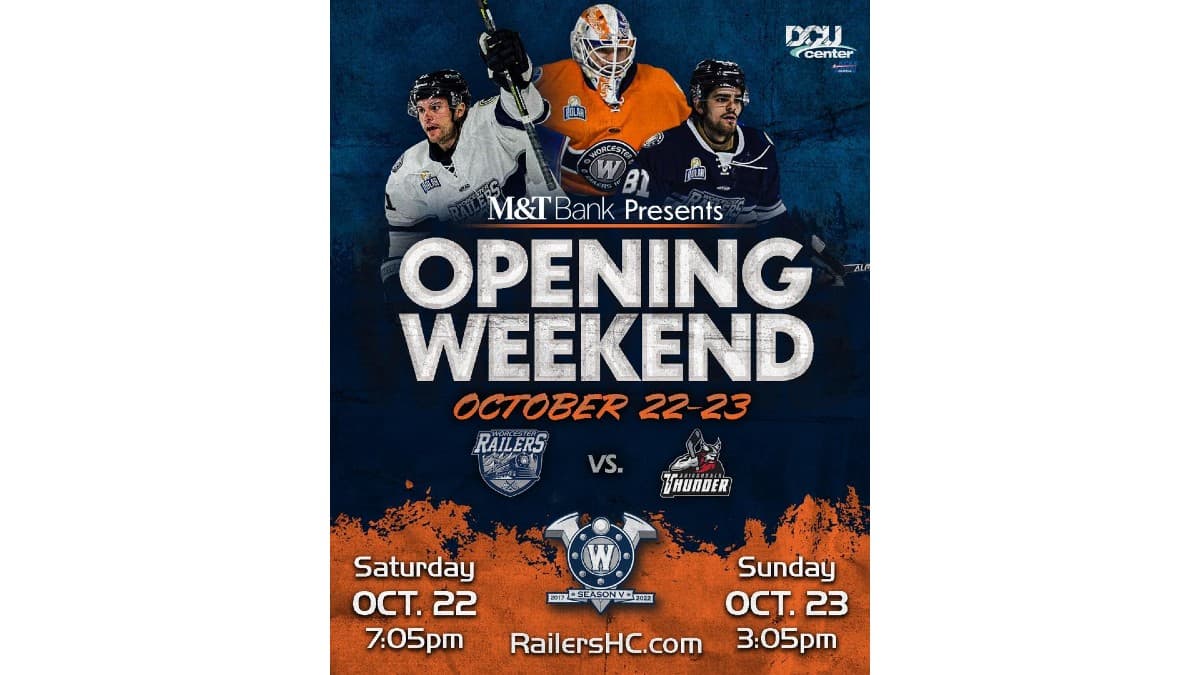 WORCESTER - The Worcester Railers Hockey Club is back this weekend to start a new season, facing off with the Adirondack Thunder this Saturday and Sunday at the DCU Center.

In addition to the big game, Railers' Opening Weekend is full of events that will bring hockey fans and Worcester residents together for fun activities and even a performance by NBC’s "The Voice" contestant and Worcester native, Cara Brindisi.

Opening Night takes off with a Pre-Game Block Party on Commercial Street. Presented by Encore Casino, the party will feature music by Third Gear, barbecue from Off the Rails and beer tastings and local vendors.

Brindisi will take the ice during the intermission of Saturday night's game. The performance marks a full-circle moment for the singer who first performed the national anthem at a Worcester Ice Cats game when she was 9 years old.

“I’d like to say thank you from the bottom of my heart. Thank you for being a city of people who support live music. From my smallest gigs to some of the largest, I feel an unconditional love from Worcester County music fans,” Brindisi said about performing in her home city. “If I didn’t build these experiences over the last decade with you all, I would have never had the courage to finally audition for 'The Voice' and take my career to the next level.”

Opening weekend is just around the corner! We are here to introduce our nonprofit of the night. @HerrenProject 💟 https://t.co/z3xLvQJMw5

If you’re interested in being a nonprofit of the night, please reach out @ 508-365-1750📲 pic.twitter.com/RfJlOjYski

Attendees of the opening weekend will have another chance to catch a Brindisi performance. After the game, she will be playing a free concert at Off the Rails on Commercial Street. Game attendees will receive priority, but the public is encouraged to attend.

The fun continues on Sunday when the Railers host their inaugural "Kids Takeover Game." During the game, kids are in charge and participate in all areas of the game production. This weekend’s Kids Takeover Game will benefit CASA Project Worcester County, a not-for-profit organization committed to speaking for the best interests of abused and neglected children in the Worcester County Courts.

For Railers president, Stephanie Ramey, the jam-packed opening weekend has a special meaning as her daughter takes the ice with her school, The Mayo School in Holden, to sing the National Anthem at Kids Takeover.

While the game will already excite die-hard Railers fans, the goal of the weekend’s events is also to draw in people who have always wanted to attend a hockey game, but never have.

Ramey encourages anyone that wants to learn about hockey or just have a fun night out in Worcester to attend a game this weekend.

“Check out a game. Bring your friends, family, co-workers. You will enjoy a Railers game, whether you understand the rules or not. If you want to learn about the sport, be open to asking questions. I still do all the time,” Ramey said about new Railers fans in the making,

“Part of what makes life exciting is putting yourself in situations where you can learn and try new things. Having a ‘hometown team’ is emotional. It’s exhilarating when they are winning, infuriating when there’s a bad call, heartbreaking when there’s a tough loss," Ramey added. "There’s a connectiveness, I think, as a community of fans, that brings us together.”